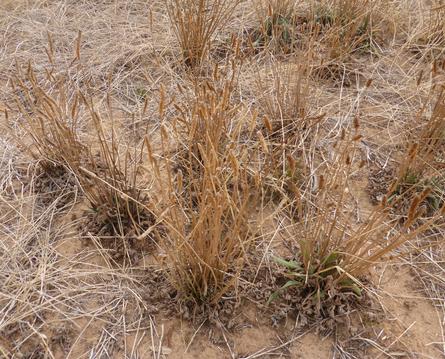 Well, I was none the wiser, but certainly something had been planted here.   Or was it a weed that had come up after a crop had finished?   It did not seem possible when I compare with all the other paddocks that had been left after a crop.    No, I think this is the crop that was planted. 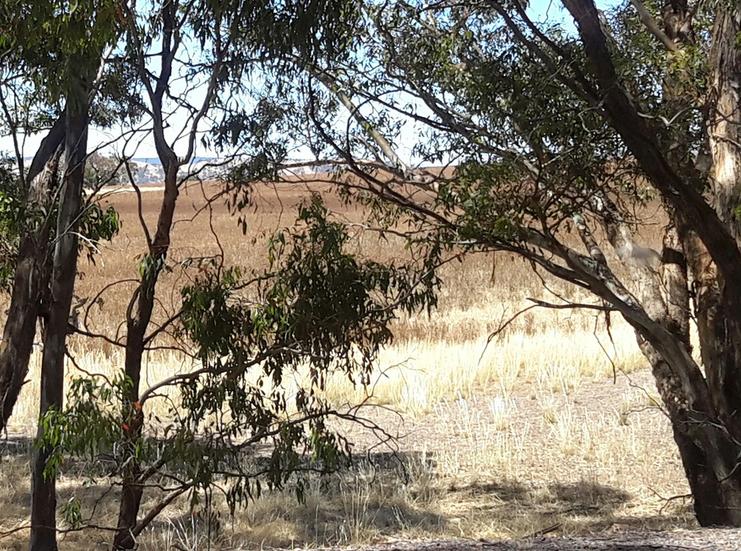 What is your verdict? 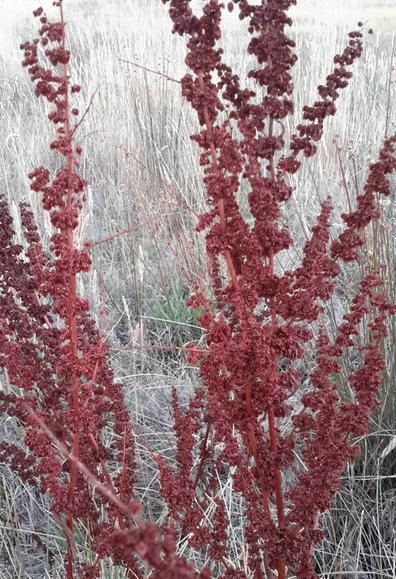 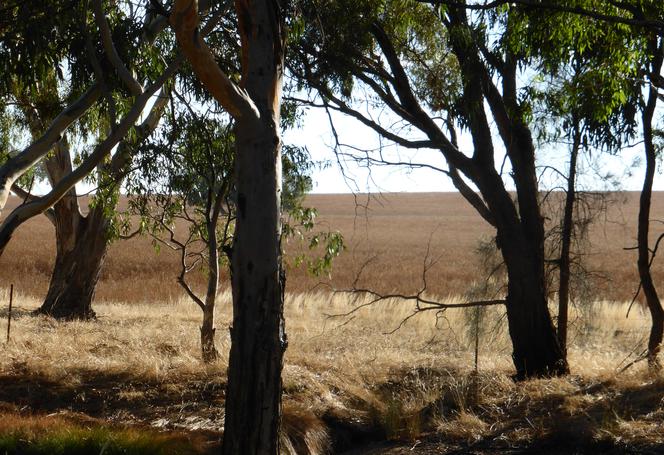 On my return, I wondered how I would get closer to the brown paddock.  Then I saw a fence that would easy to get over.   And I did.   Can you see the fence?

Has the farmer planted a grass around his crop to protect it from cross-pollination? 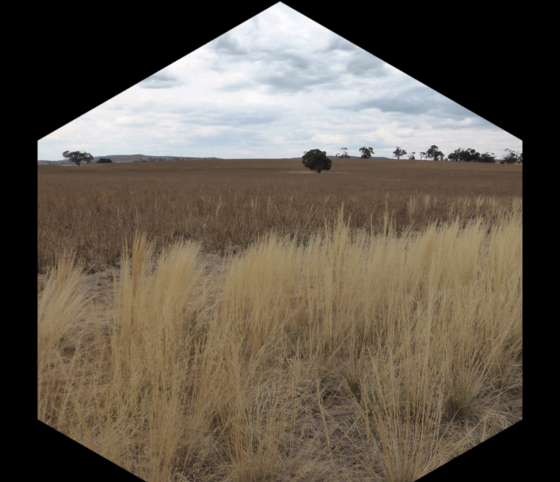 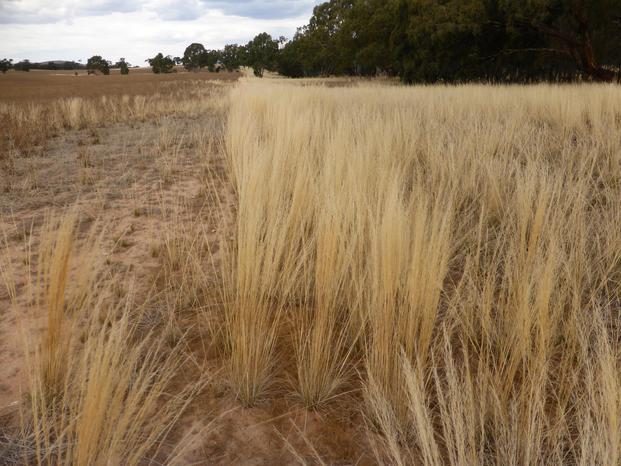 What do you think?   Does it look like this to you?

I have tried to enlarge these pictures, but they are still not clear enough to be certain. I think I can see these weeds at the edge of the paddock.  Look at the next picture.

When I came past in the afternoon I could see that the paddock has been reaped!

Well, problem of the brown paddock solved, except for the name of the crop.   One day I might find out.  It has been an interesting exercise. 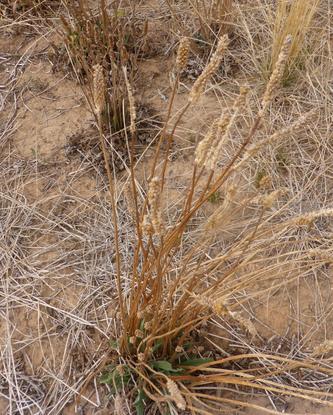 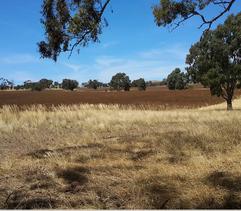 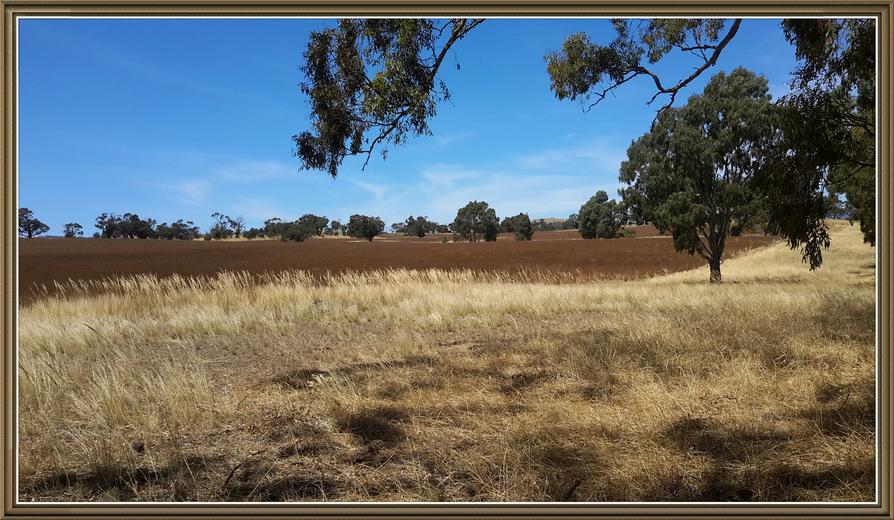 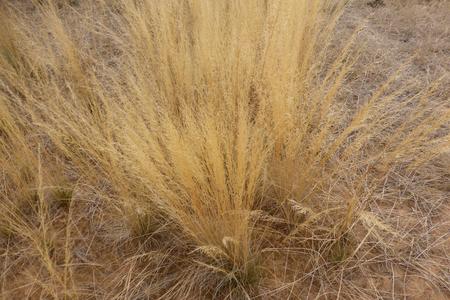 I could now see what it was not, but what was it?

These are all the remains after a harvest or plowed ground that has been left standing.    But the brown paddock below.....

Well, well.   Surprises every day.   When I drove past the brown paddock in the morning I noticed there were sheep on it.    They are a bit hard to see in the picture below, but there are sheep on that paddock. I knew something must be different about it, but could not stop as I had a meeting to take.

This is the brown paddock.   You may have seen it once before, but this page is looking at it a little more closely, although the real close look is yet to come.

I saw it while I was photographing for the harvest pages, but then I did not take too much notice of it.   But since driving past it every second week, I began to wonder what it is.    Certainly it is very dense.   Is it a crop?   At first I thought it was the remains of a crop, as I had seen brown tare-remains before.   Here are some of them below.​ 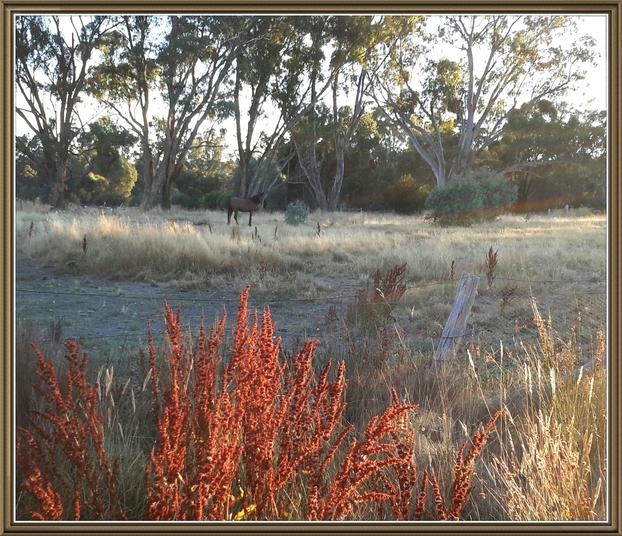 And yet, look around the trees.  Weeds would grow right up to the tree!!!! 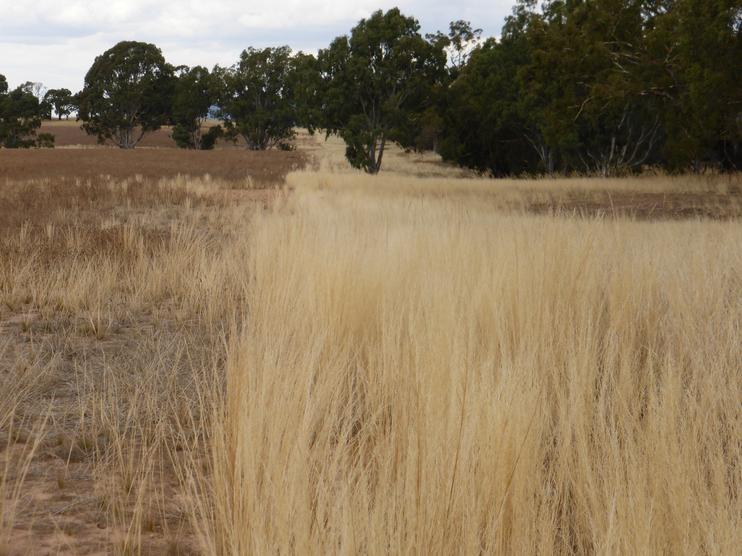 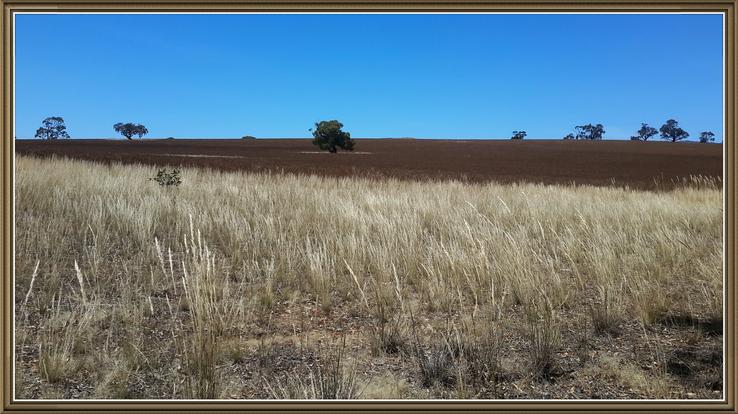 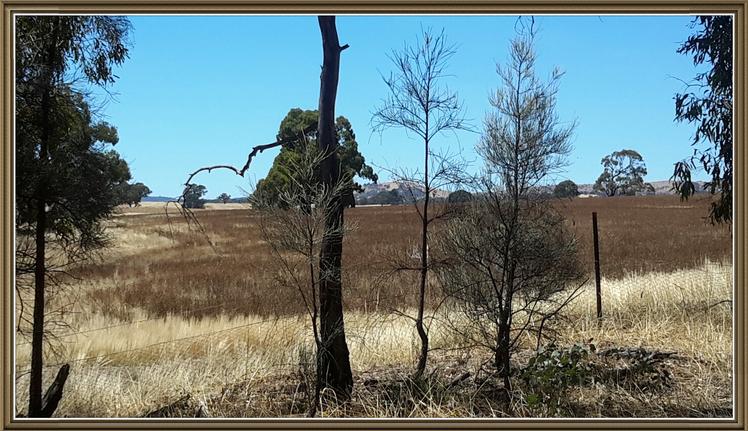 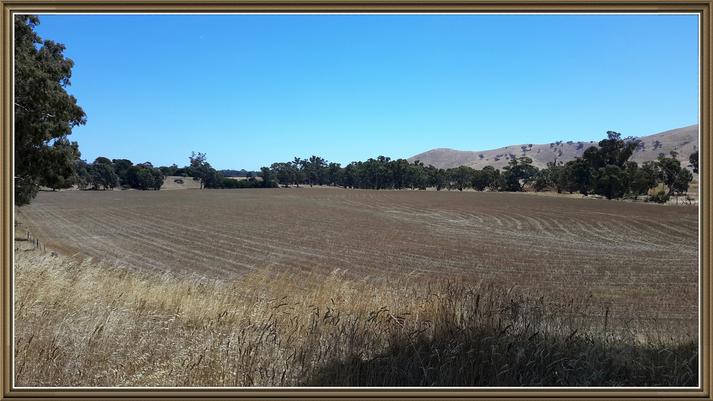 This yellow grass also fascinates me.   It seems to surround the whole of the brown paddock as far as I can see.    It is a lovely grass, about a metre or four feet high. Those measurements aren't equal, but you get the idea.

And I think the yellow grass is also planted! 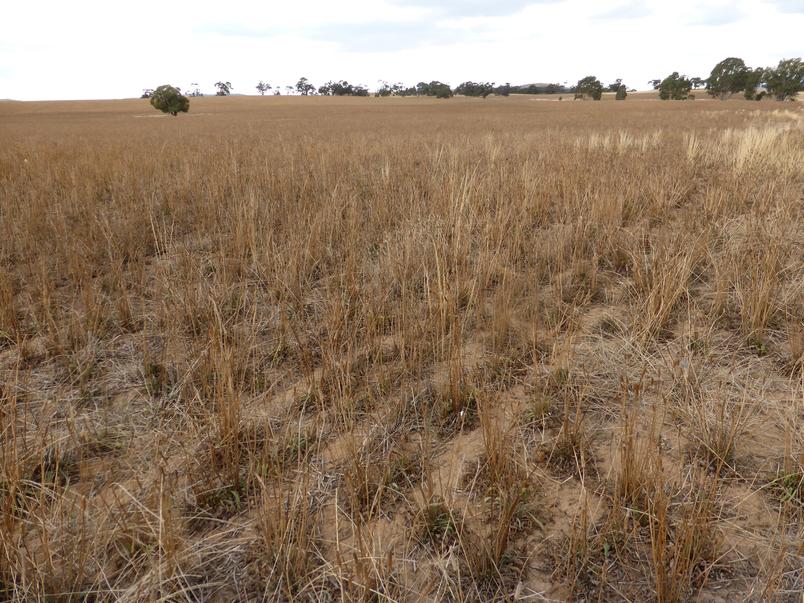 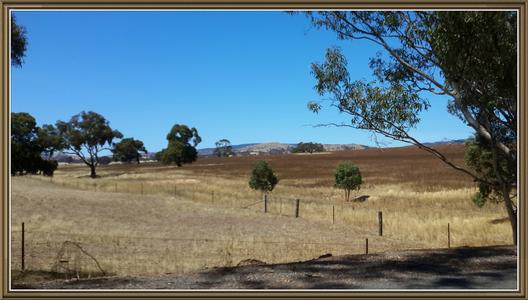 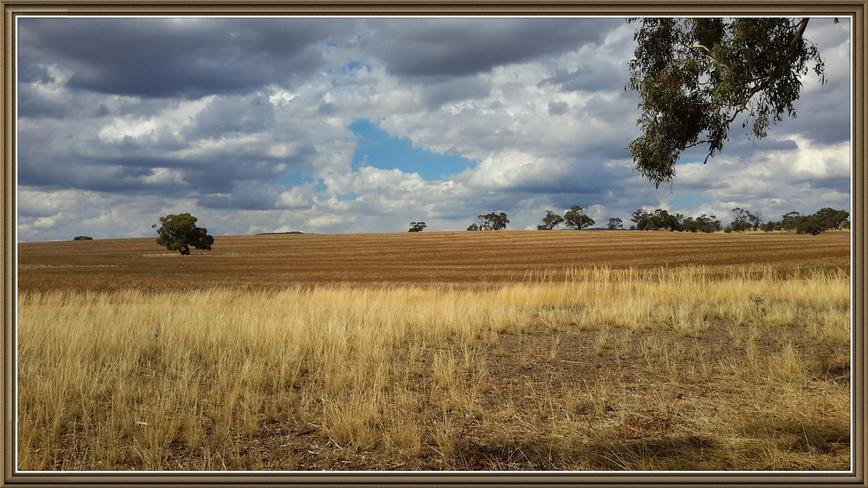 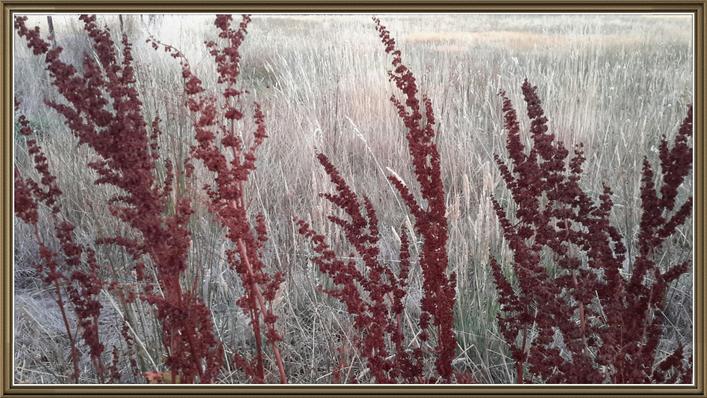 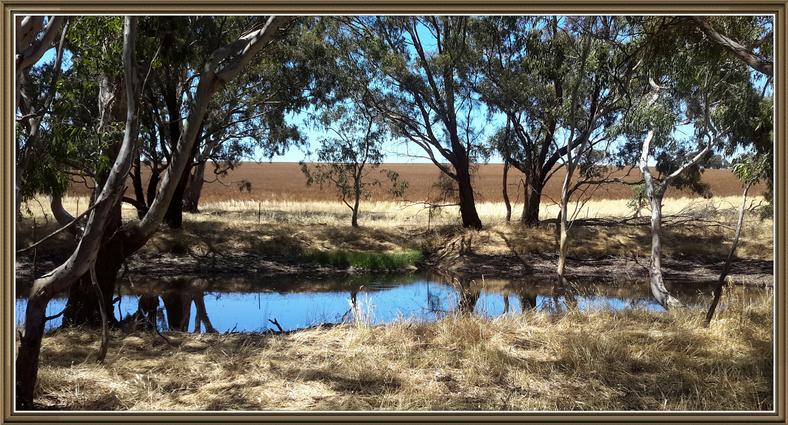 The leaves look a bit like plantain leaves, although there were few to compare, and I am not that good on recognising herbs.    But maybe these are a herb and the farmer is waiting to gather the seeds!

Well, I was WRONG!   It was not the tare or weed I thought it was.  A big surprise.

When I drove past early in the morning, it still looked like it had always looked, but as I was going to a meeting, I could not stop, except to take a few photos as I drove past.  I tried to get some closeups, but they did not work.