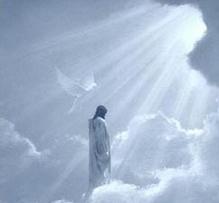 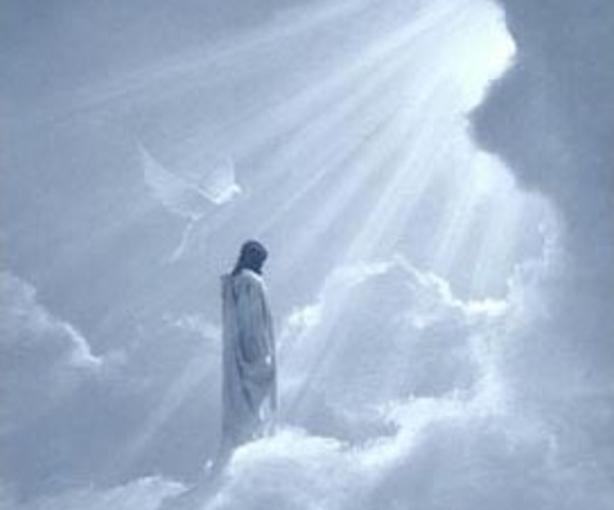 Adam and Eve have succumbed to the temptations of Satan, and fallen into sin.   Now they are doomed to misery, sickness and death. “The whole family of Adam must die”. 11

The countenance of the Son of God is marked with sympathy.  He looks upon the angels;  their anxiety is intense.   Approaching the glorious light surrounding His Father’s throne, the Son quietly passes into its brilliance.   Soon He is “in close converse with His Father”. 12

Our newly created children have fallen for Lucifer’s lies.  They have eaten of the forbidden fruit.

My Father, we knew this would happen, and we made provision for the terrible emergency. 13   You agreed to send me to redeem them, to become part of the human race and take their penalty.

Father, may the promise be given to our sinful children?

Quietly the Son leaves His Father’s presence.   His face still shows sadness, and the angels weep in sympathy.   No one speaks, but heart empathises with heart.

These dear children have no way of escape.  If left to their fate, they must die eternally.    We created them in our image;  they are our children.    Our love for them is deep, but my Father, there is no other way.   We must provide the remedy for sin.

Father, may I give them the promise of redemption through My blood?

Again the angels see their Commander leave the presence of His Father.   His countenance is still sorrowful.  Angelic harps are silent; for the salvation of the human race is at stake.

Once again the Son returns to His Father’s presence.

I am willing to drink the bitter cup of humiliation for the human race.   I know your heart aches, but Father, the penalty must be laid upon a divine-human substitute, and there is only the Son .  No angel can pay the price….

Father, will you give the command that the Seed of the woman will bruise Satan’s head?

But Father, I am willing to bear the penalty.   I will be oppressed and afflicted, wounded and bruised for their iniquities, but Your Spirit will sustain Me.  I will be taken as a sheep to the slaughter.   You will be close by Me in that hour.  14

Yet I will see the travail of My soul, and we shall be satisfied Father. 15    The victory will be won.   The universe will be safe, for sin can never rise again. 16

Yes Father….     I will give the command that our fallen children may have hope.

When the Son of God comes from the presence of the Father the third time, “His countenance is calm, free from all perplexity and trouble, and shines with benevolence and loveliness, such as words cannot express. 17

“Said the angel, ‘Think ye that the Father yielded up His dearly beloved Son without a struggle?    No, no.    It was even a struggle with the God of Heaven, whether to let guilty man perish, or to give His beloved Son to die for them’.” 18

The plan of redemption is opened up to the angels, and nothing is concealed from them.   At first they can not rejoice, but being assured that the death of God’s Son would not only redeem man, but destroy Satan, they are comforted.   After their Commander has explained everything, He bids them be reconciled to the plan, for it has been accepted by the Father.

“Then joy, inexpressible joy, filled Heaven.  And the heavenly host sing a song of praise and adoration.   They touch their harps and sing a note higher than they have done before, for the great mercy and condescension of God in yielding up His dearly Beloved to die for a race of rebels.”  19