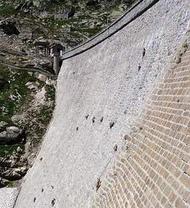 Imagine you are living at the top of a high mountain over-looking a huge expanse of water held back by a concrete dam wall.   At the foot of the mountain, near the base of the wall, is a township with several hundred people.

One day you notice what appears to be a slight crack in the concrete directly above the homes in the town below.

Extremely concerned that the fracture could quickly expand and cause a rift in the concrete, allowing millions of tonnes of water to deluge upon the population in the valley, you hurry to the town mayor to warn him.

“There is a crack in the dam wall?”

“Yes, the pressure of the water will make the wall collapse and the town will be destroyed.”

“Oh, I wouldn’t be too concerned.”

“But I tell you, the water will wipe the town out.”

“Look, I’ll send an engineer up to have a look.  Don’t worry, that dam has been there a long time.   It will last a few years yet.”

Horrified at his lack of concern, you go to the town engineer yourself, and explain your fears.

“I wouldn’t be too worried.  But I’ll come and have a look.”

Arriving at the place where the crack can be seen, you point to the small hair-line fracture that can be seen on the outside of the concrete.

“Oh, that’s nothing”, says the engineer.  “Look its been there a long time.  See how grass is growing in the area.   I wouldn’t worry if I were you.   Anyway, don’t you live up here on the mountain?”

“Yes, but you live down in the valley.”

“But what about the whole town?  It will be wiped out when the dam bursts.”

“What are you going to tell the mayor?”

“The same as I have told you.   It’s nothing to worry about.”

Again you go to the mayor’s office, not at all satisfied with the engineer’s casual regard for potential danger.  In vain you try to convince him that something should be done.

“It would be best to evacuate the township.”

“Well, you have to do something.  The dam will burst suddenly, and no one will be prepared.:”

“Listen, I am mayor of this town, and I will decide what is best for my people.  You go back to your mountain, and when the dam breaks, at least you will be safe.”

“But don’t you care what happens to this town?”

“Off you go now.  When you see the water begin to trickle through that crack of yours, then come down and tell me.   Until then, I don’t want to hear about it again.   Do you understand?”

Returning sadly to your home on the mountain, you wonder how people can be so unconcerned about possible danger.   Yes, it is true, the crack appears to have been there quite some time.  But the longer it has been there, the closer it would be to weakening the whole structure.

For some weeks you observe the crack in the dam wall.   It doesn’t seem to be getting any bigger.   You look down upon the township below.  Everyone is going about their business, oblivious of the fears you have for their safety.

You see men and women going back and forth to work.   You see the mayor opening new buildings and organising civic occasions.

You see weddings, parties, picnics, and children playing in the streets.   Suddenly you realise that the people do not know about the crack.

Having lived an exclusive kind of a life on the mountain top, its not easy to go down and start talking to people out of the blue, but it must be done.

“Excuse me sir, did you know there is a crack in the dam wall?”

“Well there is.  Soon the dam will burst and the town will be destroyed.”

“Does the mayor know about this?”

“Yes, but he doesn’t want to talk about it.”

“Well, it can’t be important.  So I won’t worry about it either.”

“But the dam will burst.  Don’t you understand that?”

“Listen, if the mayor doesn’t think its dangerous, then it isn’t.  Now do you mind, I am busy.”

“Excuse me madam, but I have something very important to tell you.:”

“There is a crack in the dam wall.”

After meeting people all day, you climb to your mountain home very discouraged.

The days go by.    What about the crack?

It appears the same, or does it?   It’s hard to tell.    Maybe it does look a little wider.

But perhaps it is your imagination.

Then one day, you are certain.   Something does look different.   On investigation, you find that there has been definite movement, only slight, but now you are very worried.

Only a matter of time, and the township will be gone.

One day there is a knock on your door. A man stands at the door with his teenage son.

Strange, no one visits your mountain home. The long climb is usually too difficult for those living in the valley.

“Thank you.   I hope you don’t mind, but I have heard you have told people there is a crack in the dam wall.”

“I am worried about it.   If the wall breaks, our whole town will go.”

“That’s right.  That’s what I have been trying to tell people.   Come, you can see it from here.”

From your lounge room window you point the crack out to your visitor.   “Look, can you see it?”

“Look, there where that bit of grass is growing out of the wall.”

“Yes, and it’s a bit bigger than it was when I went and told the people.”

“But its bigger than it was.”

“Oh, I don’t know.  Perhaps you are making a fuss about nothing.”

“Yes son, but I think he is imagining things.”

“No, I am not imagining it.  Believe me.   It has got bigger.   There is a real danger to the people in the town.   You will all be swept away.”

“Well, I’ll come back another day and have a look.”

A few days later, you decide to print a small leaflet about the crack in the wall, entitled: ‘ONLY A MATTER OF TIME’, enough for every home in the valley.

Soon the local paper takes up the story – ‘THE CRACKED MOUNTAIN MAN’.

It tells of a lone hermit on the mountain who thinks there is a crack in the dam wall, but that official investigation had confirmed to all residents in the township that the ‘crack’ is not in the wall…..

Months go by, and the crack is getting bigger.    Now there is no question about it.

Maybe the man and his son will believe you now.    You go down and find them.    Fred takes some convincing, but eventually he consents to climb the mountain.   “Coming son?”

“Yes, it does look bigger than a few months ago.   But the concrete is very strong.   It can stand the weight.  After all, the crack is on the outside, not the inside.  If it was on the inside, that would be a different story.”

“Yes son, it does look bigger, but I don’t think there is anything to worry about.   The dam won’t burst.”


Day after day you check on the dam wall, and with every new day, your fears mount for the safety of the town and its people.

Often you visit with as many folk as will listen to your story.   You pass out handbills showing photographs of the ever-widening rift in the wall.

You are not very popular with the town’s people as they think you are a calamity howler trying to disturb the peace of the valley.

Occasionally you see men, women and children climbing the mountain to have a look at the crack, and although you invite them to your home to discuss the subject, few accept the invitation.

It is not uncommon to see them laughing and joking about the subject of your concern.

“Well, it doesn’t look much like a crack to me.”

“No, I think the crack is in the mountain man’s head.”

And everybody laughs at your expense.

But the crack in the dam wall is getting wider.   Even those who laugh and mock admit that it does look bigger than it did last time they climbed the mountain.

And they return to their homes unconcerned, with laughter still upon their lips.

Well, as you can guess, I am the man on the mountain, but of course it is not a dam wall I am concerned about, as serious as that would be for a small town at its base.

Instead, it is a disaster facing to the whole world.

This threat is a catastrophe beyond description – a time of trouble such as never was.

When it comes, not only will dam walls collapse, but mountains and islands will disappear into oblivion, and the plains will open up giant fissures that will swallow whole cities and towns forever.

Some people will tell you we are going through a cycle of catastrophes, but is this true?

There is only one Book in the world that has the answer – the Christian Bible.

Many do not like to even consider this, but in the light of world events, it is time we began to listen.

Only a Matter of Time 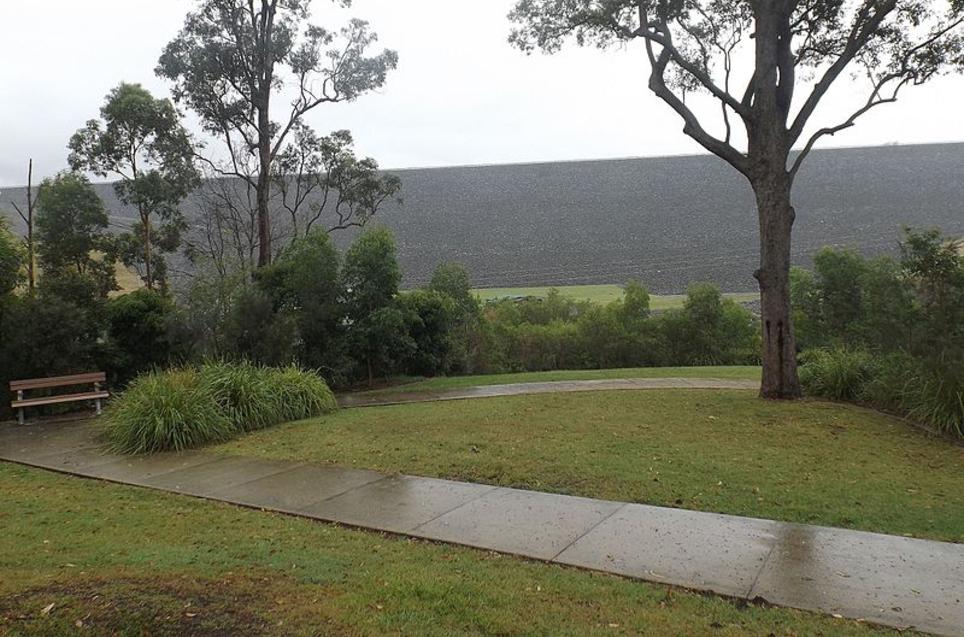 The Bible says, “And there were voices, and thunders, and lightnings, and there was a great earthquake, such as was not since men were upon the earth, so mighty an earthquake and so great…  And the cities of the nations fell… and every island fled away, and the mountains were not found…”  Revelation 16:18.19.20.


Jesus said, “Nation shall rise against nation and kingdom against kingdom.  And great earthquakes shall be in divers places, and famines, and pestilences, and fearful sights and great signs shall there be from  heaven….  And there shall be signs in the sun, and in the moon, and in the stars;  and upon the earth distress of nations, with perplexity;  the sea and the waves roaring,.  Men’s hearts failing for fear, and for looking after those things which are coming on the earth, for the powers of heaven shall be shaken…. “    Luke 21:10.11.25.26.

As you see disaster after disaster taking place, remember the words of Jesus – “Watch ye therefore, and pray always, that ye may be accounted worthy to escape all these things that shall come to pass, and to stand before the Son of Man.”  Luke 21:36.

The only hope for the world is the second coming of Jesus Christ, as He will take His people to His home in heaven.   Yes, the only hope is to leave this world for a better land.  Jesus promised He would come back.

If you are like the men and women in the township below the dam wall and continually ignore the warnings, what else can God do?

He did not stay in Heaven and call out, hoping we would hear.   He sent His only begotten Son to become one of us.   Jesus suffered and died for our sins.   He paid the price of our iniquity.   He promised to return to take His people home.

And He left an inspired Book to tell the story.

As one of God’s ‘mountain men’, I am appealing to you to listen to the message from Heaven.

You can start reading your Bible.

You can pray and ask the God of Heaven to help you understand.

Why not make a decision today?