Jesus is pushed along the narrow streets to the council rooms, first to meet with Annas, then Caiaphas and the committee.

The disciples have left the garden, but John returns to follow Jesus. Peter cautiously follows behind him.

John sits in a quiet corner where He can watch the proceedings.   Peter is uneasy.     He doesn’t want to be recognised as a disciple, so he mingles with the servants.

Jesus stands quietly before Caiaphas, patiently waiting the final stage of His passion.

The hall is noisy as men argue and debate. Tensions mount.

One of the false witnesses states under oath, ‘We heard Him say, I will destroy this temple that is made with hands, and within three days I will build another made without hands.’

Others who also claimed to hear Jesus speak these words disagree entirely. ‘No, He did not say that.  He said….’

The chief priests and the council try for two hours to find witnesses whose stories sound credible. But none are found.

Caiaphas asks Jesus, ‘Do you say nothing when these witnesses testify against you?’

Jesus answers not a word.

The high priest then stands to his feet and with pomp and great importance states, ‘Under oath, before the living God, tell us whether you are the Messiah, the Son of God.’

Jesus looks at Him and answers, ‘I am.    You will see the Son of man sitting on the right hand of God in power, and coming in the clouds of heaven.’

In anger Caiaphas tears his priestly robe, something a high priest is never permitted to do.

He then announces to the council, ‘He has spoken blasphemy.  What further need have we of witnesses?

You heard His blasphemy.  What do you say?’

The men cry out in unison, ‘He is guilty of death.

After the verdict is given, the men lose all dignity and reason. Rushing towards Jesus, they push and shove Him. Some spit upon Him.  Others slap His face.

‘Hey Messiah, prophesy to us.’

Suddenly  there  is  a  piercing  scream.       A  man  runs frantically  to Caiaphas.   It is Judas.   He throws the silver on the floor and yells, ‘Let Him go. I have betrayed innocent blood.’

The high priest is startled.

His hypocrisy has been revealed and he doesn’t know what to do.   In his embarrassment he blurts out, ‘What is that to us?’  He scorns the traitor.

In  desperation,  Judas  turns  to  Jesus.       He  throws himself at  the Saviour’s feet, and with tears streaming down his face, cries, ‘Master, release yourself.’

Jesus looks sadly at Judas.   ‘This is why I came into the world.’

The traitor can bear his guilt no longer.    He runs from the hall and finding a rope, hangs himself on a tree.


Outside the hall, it is cold.  In the early hours of the morning, Peter sits with the servants around the fire.

One of the ladies looks at him.

Peter looks at her dumbfounded.  He replies, ‘I don’t know what you are talking about.’

The disciple gets up from the fire and walks towards to the porch.   A young lady notices him and says to a friend, ‘Hey, this fellow was with Jesus.  I saw him.’

Peter answers with an oath, ‘I don’t know the man.’

A little while later, some of the men recognise Peter.   ‘You are one of them.  Your speech betrays you.’   Denying it, Peter begins to curse and swear.

Instinctively, Peter turns to look inside the hall. He sees someone slap Jesus across the face.

His heart is broken.

Peter rushes out of the court yard, tears streaming down his cheeks.

He runs through the dark streets of Jerusalem to Gethsemane, and falling on the ground where Jesus had prayed in agony, the repentant disciple weeps bitterly.

Inside the council rooms, the men continue discussing what to do.  It is against Jewish law to charge a man by his own testimony.     It is also illegal  to  decide  a case  during the night.

After  consideration they accept the charge as valid, and make plans to meet again when the sun rises in the morning.

For the next few hours, Jesus is placed in a holding room.    He is not permitted to rest in peace, but is made sport of by the soldiers.

At the rising of the sun, Caiaphas and the chief priests meet in the council room, and again ask Jesus if He is the Son of God.

Jesus answers as He did earlier, and the official charge is recorded:

Claims to be the Son of God

Knowing they cannot crucify a man, the assembly makes its way to Pilate’s palace.  It is still early, and when the servants awaken the governor, he is not in the best of moods.

‘What is so urgent?’ he grunts.

‘The high priest Caiaphas has brought a man condemned by the Jewish council.  They need your approval for crucifixion.’

Quickly dressing, Pilate enters the room where Jesus is being held by Roman  soldiers.      He  takes  one  look  at Jesus’ innocent  face,  and realises the guilt is with the wily Jewish priests and not the prisoner.

From that moment, Pilate attempts to release Jesus.

He goes outside to the delegation of priests and asks, ‘What is the charge?’

Caiaphas answers.  ‘If He wasn’t condemned we wouldn’t have brought Him to you.’  His answer is evasive.

Other priests call out, ‘Crucify Him. He’s perverting the nation. He says He’s the king of the Jews.’

Standing before Jesus, he asks, ‘Are you the King of the Jews?’

Pilate is troubled.   He wants to release Jesus, but he has tried everything. Nothing has worked.

He faces the Jewish leaders again, ‘What will I do with Jesus?’

What can Pilate do?       These priests could ruin his reputation with Caesar if they don’t have their way.

After going back and forth between Jesus and the Jewish hierarchy, the governor sits down on the judgment seat and asks for a basin of water. Pilate then washes his hands and says before all, ‘I am innocent of the blood of this just man; you see to it.’

The chief priests cry out at the top of their voices, ‘His blood be on us and on our children.’

Pilate then orders Jesus to be beaten with many stripes and given to the Jews for crucifixion.

Jesus is taken to the common hall, stripped of His own garment and a scarlet robe thrown over His shoulders.   A reed-sceptre is placed in His hand, and a crown of thorns pushed hard upon His brow.  The soldiers then mock the Saviour on bended knee, ‘Hail, King of the Jews.’

After tiring of their sport, the men lead Jesus away to be crucified. 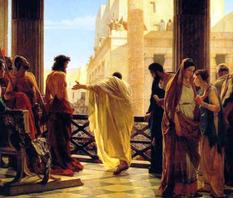 ​Go to -- Why was Jesus crucified? 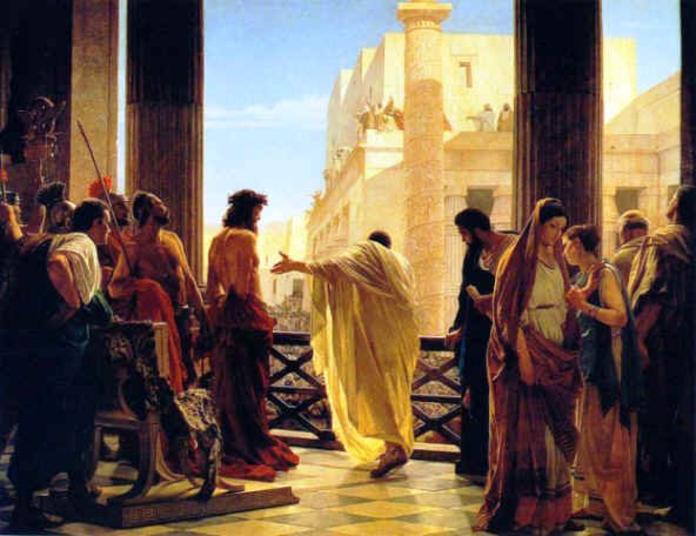